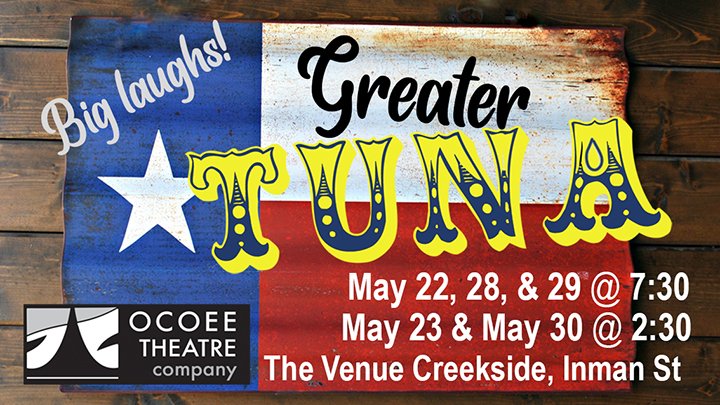 Greater Tuna, a crowd-pleasing comedy, will be performed at the The Venue Creekside in Cleveland, TN on two weekends and five dates between May 22-30, 2021
Tickets for Greater Tuna – will be available on Ocoee Theatre Company’s Facebook page and the website ocoeetheatreguild.com.
All tickets are $15. Tickets will also be available at the door, but advance tickets are recommended due to limited seating. For more information, please call 423-472-8896
The uproariously funny comedy, Greater Tuna, a production that will be performed at The Venue Creekside in Cleveland on five dates between May 22 and May 30th, 2021.
The Ocoee Theatre Company (OTC) recently announced the continuation of their theatrical program with the well-known Off-Broadway comedy, Greater Tuna, that gained rave audience reviews. To start the production, they searched for two multi-talented male actors who take on the persona of 20 different characters with different costumes portraying the whole population of a very small Texas town named “Tuna,” said to be “where the Lion’s Club is too liberal and Patsy Cline is still alive!”
The two main actors, Will Jayroe and Drew Nelson, will perform multiple roles. Jayroe, a trained actor from the North Carolina School of the Arts and Lee University, is ready to take on the demanding acting challenge. Likewise, Nelson, who is heavily involved in theater production at Lake Forest Middle School for numerous years, is anxious to display his natural acting talent in front of an audience. These two actors will be tested on their abilities to use physical expressions and quick changes to play characters ranging from an overbearing “Mama,” to a degenerate son who can’t stay out of trouble, to an overzealous defender for the Humane Society.

Jeff Guentensberger and Chandler Overstreet will fill out the cast in supporting roles. Jeff, no stranger to Ocoee Theatre Company performed in the hit show Sylvia as well as the Odd Couple, and Over the River. Chandler showed his acting ability in the musical, Hands on a Hardbody, where he played a Vietnam War Vet who brought tears to the audience. In Greater Tuna these two actors will play local radio announcers, important positions for this small Texas town. Together, they disseminate “all the good, the bad, and the ugly” news this small Southern town can give. If someone wants to know what’s happening in Tuna, Texas, you’ll need to tune into their local radio program.

Candy Tapper, President of Ocoee Theatre Company, commented, “After a long pause due to the pandemic, we’re ready to return to the stage with this live production of Greater Tuna. We’ve chosen one of the best comedies ever written, obtained a seasoned director with Jim Veenstra, and assembled a superb cast of skilled actors capable of taking on multiple characters. I wouldn’t be surprised if this show becomes an audience favorite!”